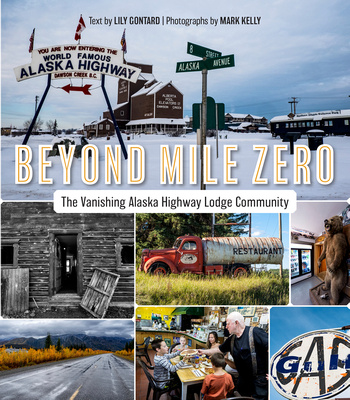 I began photographing the abandoned lodges of the Alaska Highway while on a trip south in 2011. I had travelled the Alaska Highway many times since moving north in 1999. Over the years, I noticed that the lodges were closing slowly, one by one. I approached author, Lily Gontard (gontard.ca) in the winter of 2014 and asked if she would like to collaborate on a photo-essay about these vanishing roadhouses. In the spring of 2016 we published our first photo-essay in Geist Magazine (100). You can read that article at geist.com. In August of 2017 we published our second photo-essay in Yukon North of Ordinary.

After the success of that first article we decided that a book would be a logical next step. We were on a photo and story gathering journey on the southern section of the highway when we received the news that British Columbia based Harbour Publishing agreed to work with us.

April 2017 saw the launch of the book during the First Light Image Festival in Whitehorse, Yukon.

In June of 2017 the book sold out and went to second edition. Lily and I are thrilled about the attention the book is receiving. I have added select media coverage at the bottom of this page.

"In 1942, the west coast of North America was under threat after the attack on Pearl Harbour, prompting the US government to build a military road from Dawson Creek, BC, to Delta Junction, AK. Renowned as a driving challenge and for its remote scenic beauty, the Alaska Highway opened to the public in 1948.

It was the beginning of the golden age of the automobile. Silvertip, Swift River, Silver Dollar, Krak-R-Krik, Chickaloon and other quaint and quirky establishments sprang up along the highway, offering travellers coffee, gas, conversation and a place to spend the night. During the roadhouse heyday, owners and employees lived on the frontier and earned good wages. Some were looking for a life-long commitment and a place to raise a family, others relished the isolation. Aside from truckers, today most people travel the Alaska Highway in fuel-efficient cars and self-sufficient RVs—the demand for lodge services has diminished and the businesses struggle to survive.

Since December 2014, Yukoners Gontard and Kelly have been visiting operating and abandoned lodges, recording the unique culture of the Alaska Highway before it disappears completely. The book includes the recollections of Gay Frocklage, whose parents, Doris and Bud Simpson, ran one of the oldest roadhouses on the highway, Mile 716 Rancheria Lodge, Yukon; and Bud and Pam Johnson, who met at the Mile 1318 Tok Lodge, Alaska, were married six months later and ran the lodge for three decades; as well as Ross Peck whose parents, Don and Alene Peck, operated Mile 200 Trutch Lodge, BC, as a highway lodge and hunting outfitting base from 1950-1963.

Featuring both archival and contemporary photographs, Beyond Mile Zero explores the evolution of Alaska Highway culture and will be of interest to locals and travellers alike."

Lily and I are happy to send signed copies anywhere in the world. Just send us a message via this site or through our social media @beyondmile0 (facebook, twitter & instagram)

Unsigned copies are available at your local book store, directly from Harbour Publishing or your favourite online retailer.

SELECT MEDIA FOR BEYOND MILE ZERO